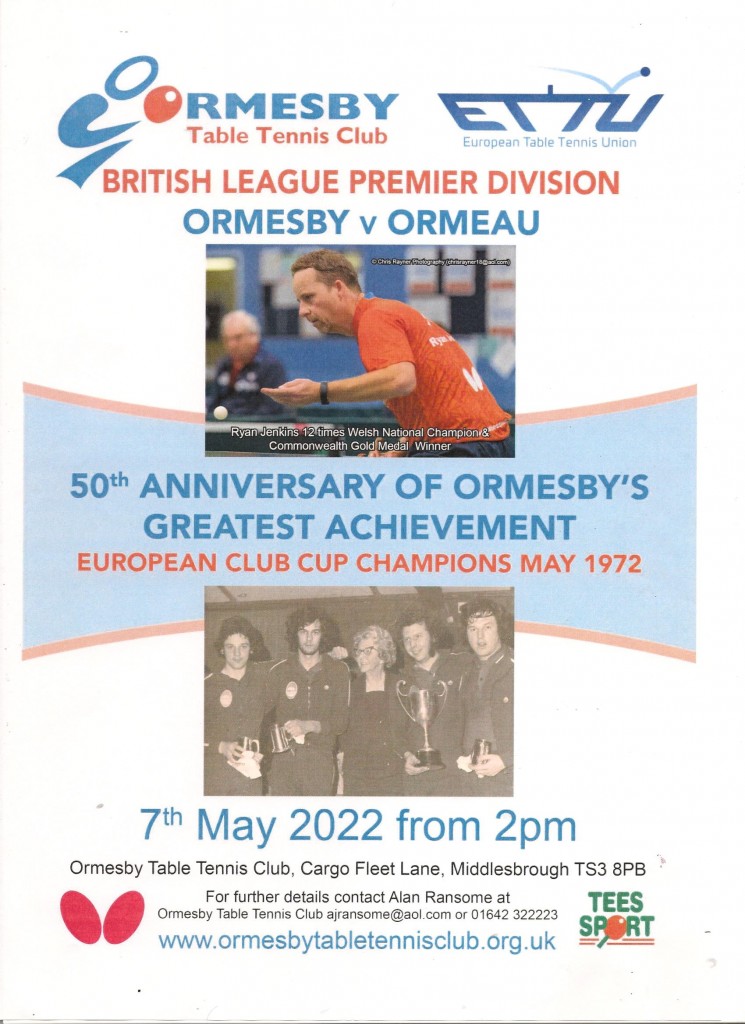 Latest results from the European Trophy women – Region A

FIRST ROUND OF MATCHES

SECOND ROUND OF MATCHES

THIRD ROUND OF MATCHES

This weekend the club are hosting the most important competition for many years, as we have been asked to conduct the qualification tournament for the European Women’s Trophy by the European Table Tennis Union.

This event will take place over this weekend.  There will be 6 teams in the event.

There will be three matches with the first match at 11:00am on Saturday morning and two matches on Sunday starting at 10:30am.  The winners of the competition will qualify for the European Trophy Finals.

This competition sees a return of our most successful female player for many years, Karina Lefevre.  Karina retired from international play 2 or 3 years ago but is coming back to represent the club in this competition and is likely to be representing the club in more competitions next season.  We are pleased to welcome Karina back.  She won many important junior titles within her successful career which spanned almost 10 years, and she represented England in many competitions including the Senior World, European and Commonwealth competitions.  Also, included in the Ormesby team are Rebecca Savage and Charlotte Weatherby. 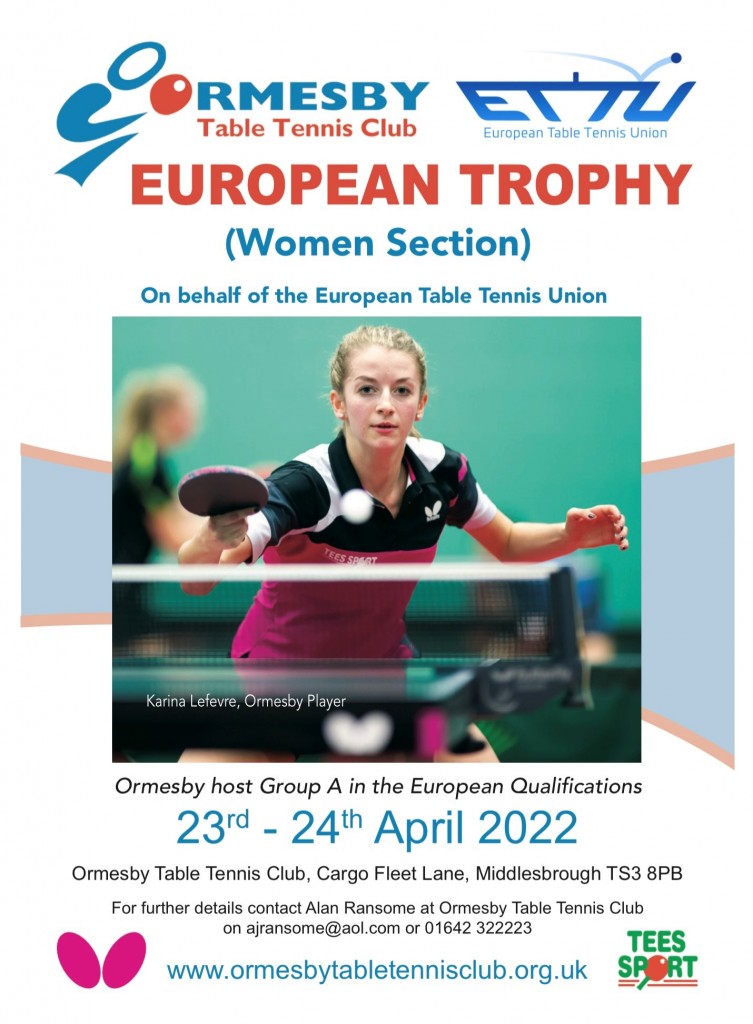 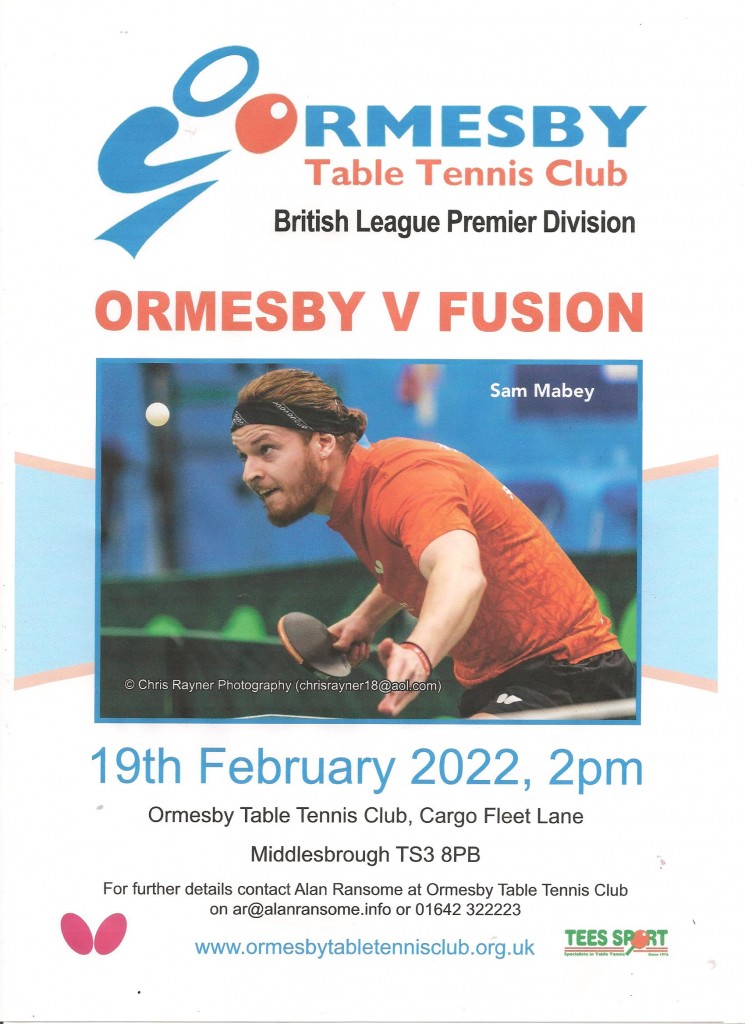 Ormesby’s next match of the Premier Division of the British League is at home to Fusion on Saturday 19th February with a 2:00pm start.  Fusion are a mid-table team who can provide strong opposition.

The Fusion team is headed by the number 1 veteran player, Lorestas Trumpauskas, who is currently ranked number 10 in the senior list.  He is supported by two fast improving young players who have jumped up the ranking this season, Joshua Bruce and Robert Pelc.

The Ormesby team has also got a youthful element to it.  Sam Mabey, who is close to the averages for the British League with 5 wins from 6 matches.  He is supported by two players from our Championship team who are placed second in their division, Thomas Rayner and David Gofton.  Please find attached a poster for the match and please bring along family and friends.

The three Ormesby Junior Teams with their coaches

THThe Club teams performed well in the Junior British League last weekend, in particular the boys first team who won silver medals finishing in second position behind Draycott, who’s team includes two prominent guest players.  Ormesby did well to win two matches, drew two and the only loss was to Draycott.  The percentage over the season for the players are; Ben Piggott 75%, Josh Weatherby 55.5%, Thomas Rayner 46% and David Gofton 44%.

The Ormesby junior girls’ team who were in the second division, achieved silver medal position in their competition, finishing behind the team from Cippenham with whom they drew on Sunday.  The Ormesby team included Ella Pashley and Eve Witterick including guest player Jyothi Ghanta.  The averages for the season are; Ella Pashley 85%, Eve Witterick 50% and Jyothi Ghanta 65%.

This weekend the team drew two matches with Cippenham which included the top Jersey player Hannah Silcock who was unbeaten the whole season.  We also played a draw with Sophia Gardens, the team from Cardiff who are basically the Welsh team.  Ormesby won their remaining three fixtures. 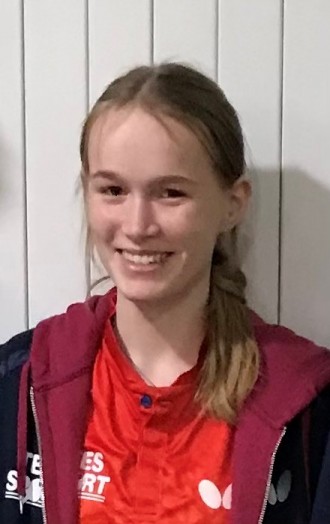 Great news for Eve Witterick who has been invited to play in the Senior Nationals.

The Mark Bates Ltd, National Championships will take place on 25 to 27 March at the University of Nottingham where the best 32 players in the country will be playing.

Well done Eve from all at Ormesby. 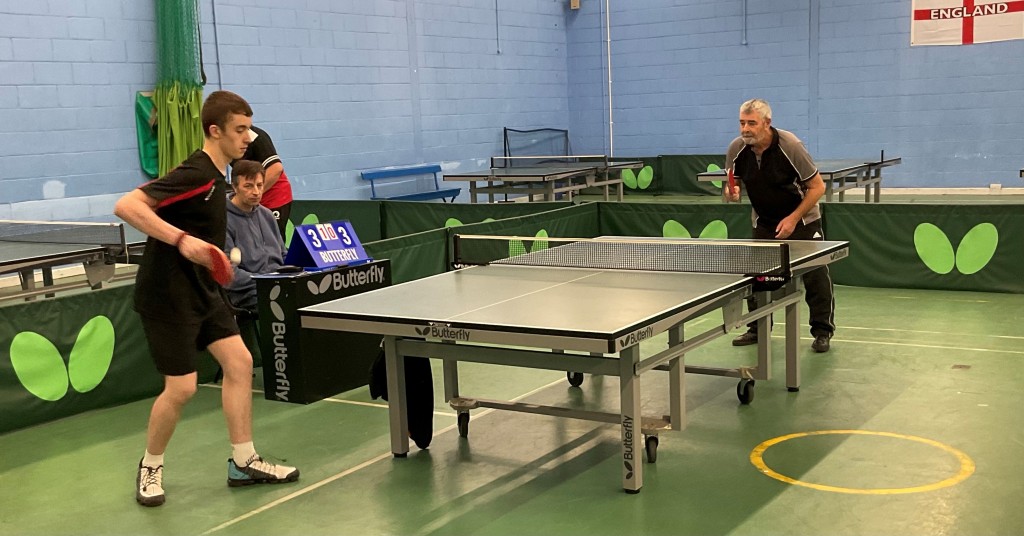 Peter Wagner right, a 50 player at Ormesby and Ormesby member David Pashley learning the correct procedure of umpiring during the November 2022 course at Ormesby.
+++++++
Ormesby Table Tennis Club are hosting a Level 1 Umpires Course on Saturday 10 September 2022 from 10.00am until 4.00pm.
The course will run by Blue Badge International Umpire Tom Purcell from Liverpool.
Tom ran the previous course at Ormesby in November 2021.
Anyone wishing to attend the course can book on the Table Tennis England website (Umpires Course). 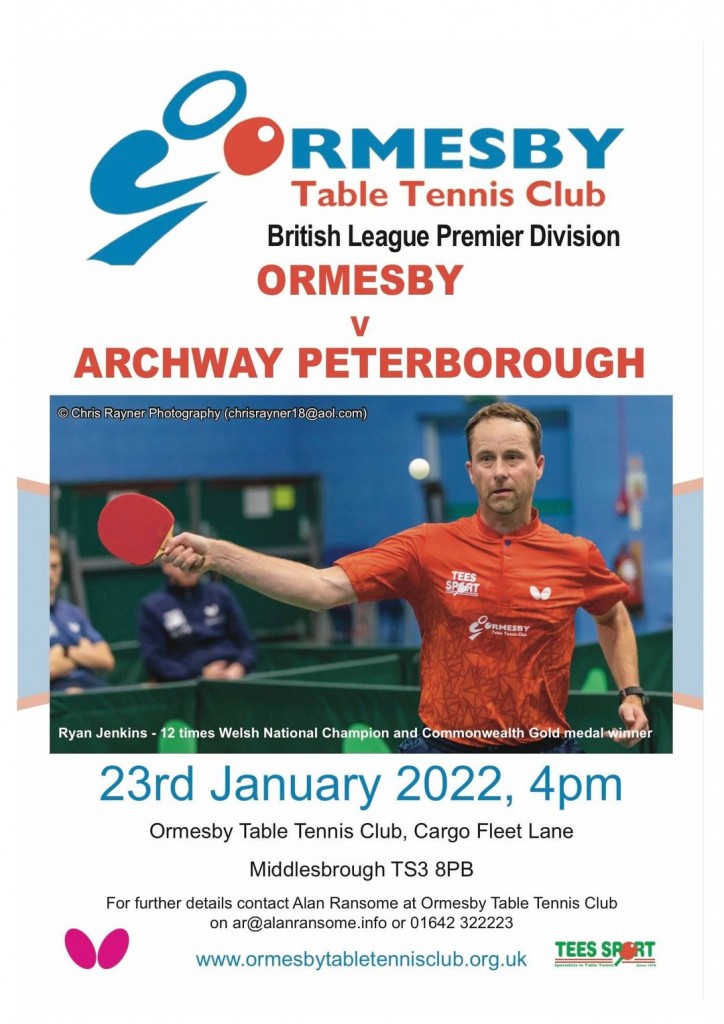 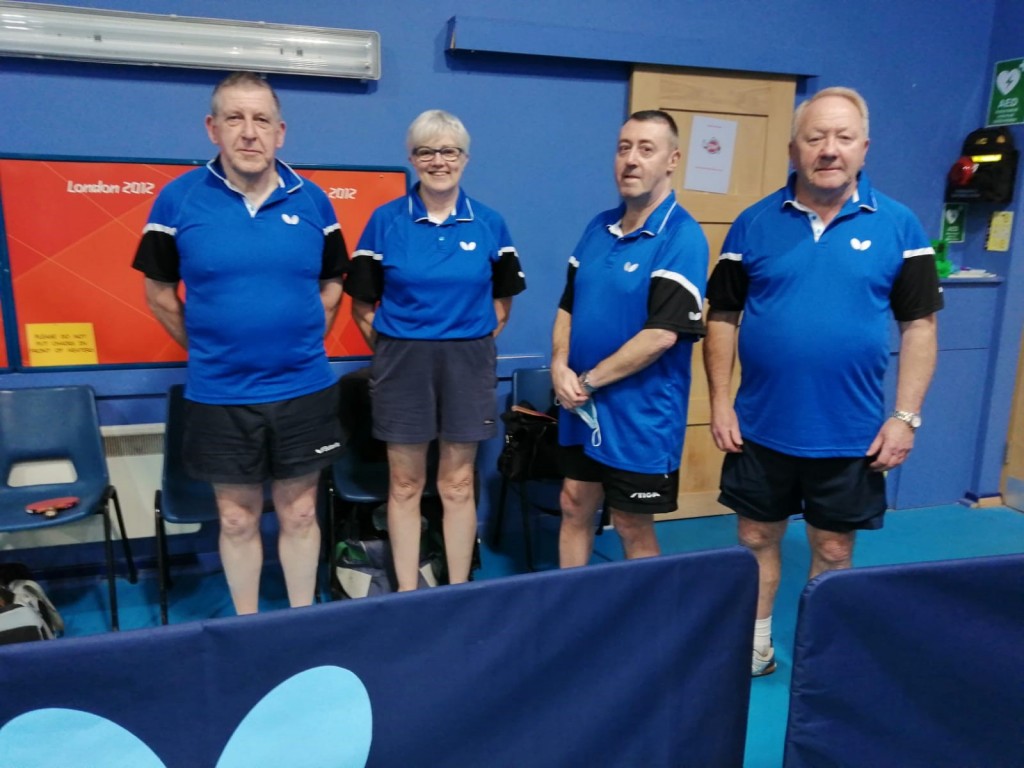 The newly formed Cleveland Over 60’s played their second round of matches in Division 2b of the county championships at St Neots at the weekend and came away with a 6-4 win against Warwick’s 3rd and a narrow 6-4 loss to Worcs 2nd.

Also in the squad are Phil Webster and Jane Lynas who played in the first round in October.

They next play their 3rd and final round of matches on Feb 12th. 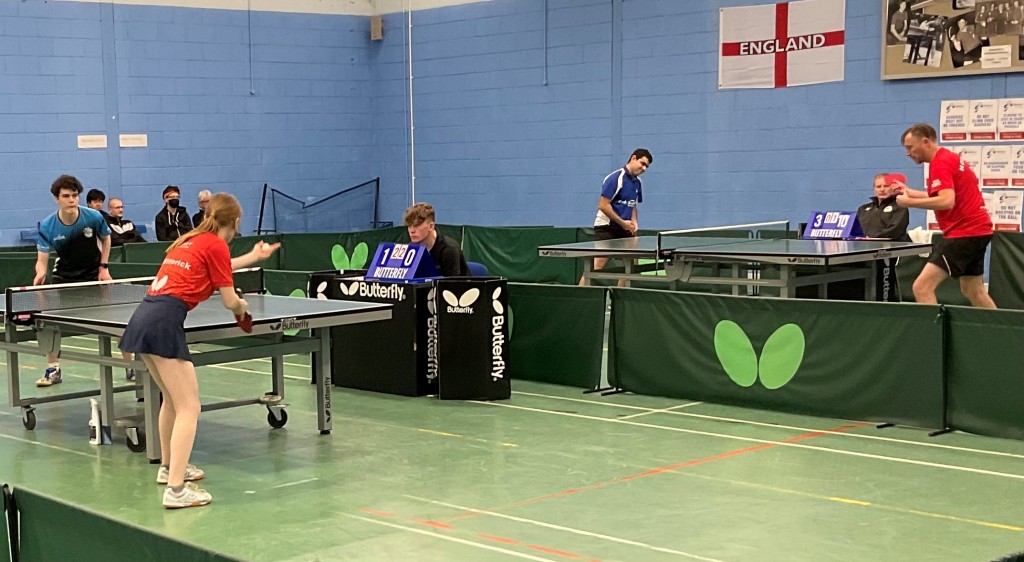 Northfield’s Mark Simon on the right in red and Eve Witterick of Ormesby‘s 4th team also in red.
Two local teams playing side by side in the Senior British League matches on Saturday 11 December at Ormesby.
Quite an intense looking affair. 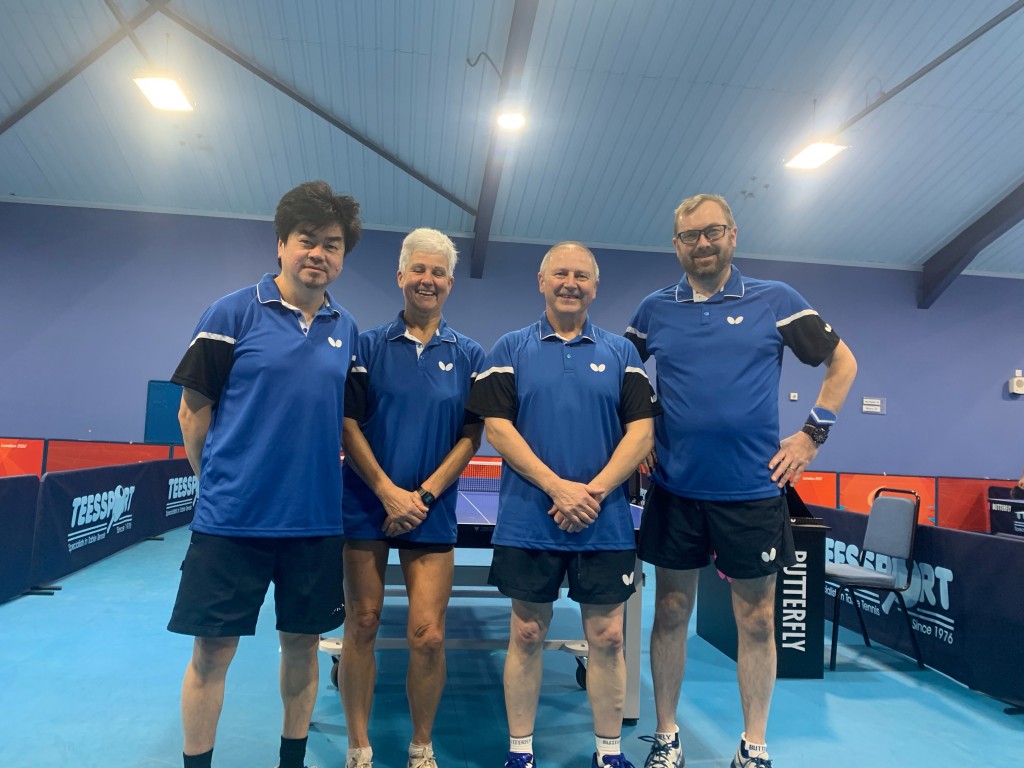 The reformed Cleveland County Vets team made the long journey to St Neots and came away with 2 wins and a draw.
They beat Cambridgeshire 7-3, Northants 8-2 and drew with Warwickshire 5-5.
The team left to right Jevon Chan, Barbara Kearney, Dave Ashwell and Carl White play again on January 30th 2022.
Well done to all. 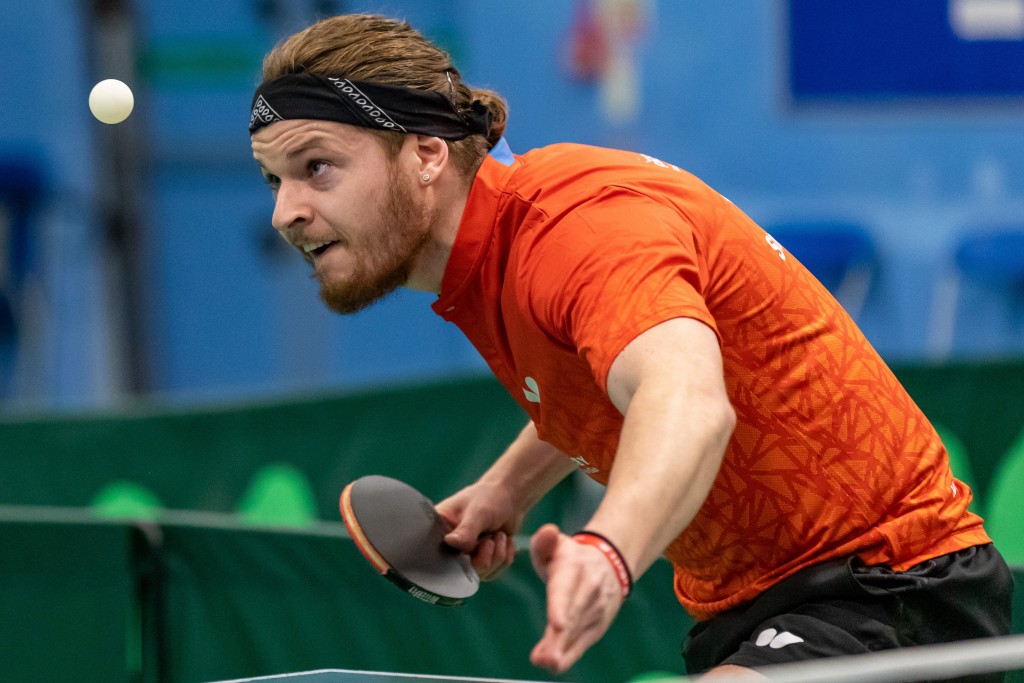 Sam Maybe – Player Of the Match

Ormesby moved to the top of the British Table Tennis League on Friday evening with a 4-3 victory over the Northern Ireland team, Ormeau, in Belfast.

Ormesby’s 4 wins were scored by Sam Mabey and Ryan Jenkins who both won their two singles.  Mabey was nominated as Man of the Match after he beat Ashley Robinson 3-0 in his first singles and then beat Zack Wilson by the same score in this second match.  Jenkins had more difficulty.  In the opener he beat Wilson by 12-10 in the fourth game and was also taken to four games in his second set against James Skelton where Ryan won 11-8, 11-5 in the third and fourth games.

Ormesby are now top of the table with a maximum 9 points from the 3 matches played so far.  Ormeau are second with 7 points from 3.  Third is Archway Peterborough who have 6 points from 2 matches.  Ormesby entertain Archway in their next match on the 23rd January 2022. 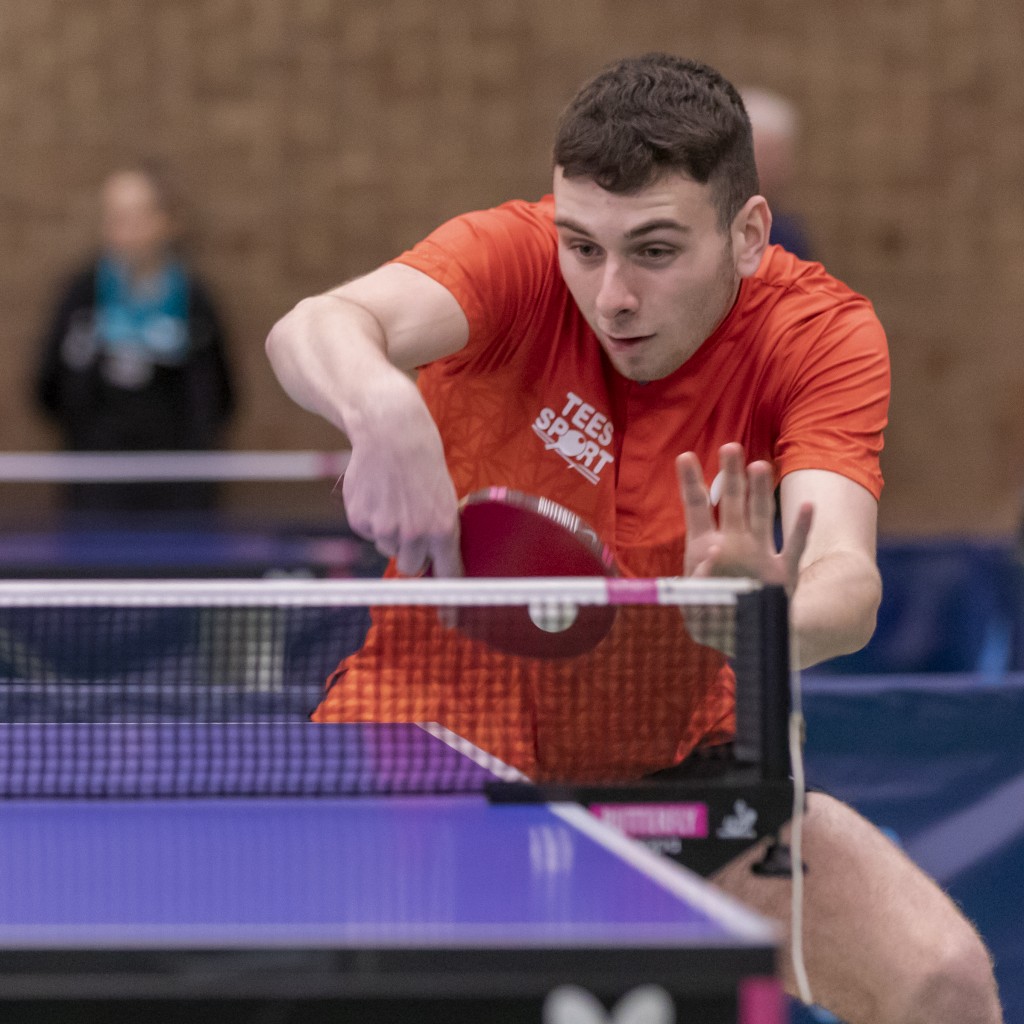 Ormesby are amongst the leaders at the top of the Premier Division of the British Table Tennis League after their 5-2 victory against the Essex Club BATTS in Harlow on Saturday 30th October.

The match was closer than the score line suggests.  Ormesby’s Sam Mabey was the most successful player winning both his singles and combining with Helshan Weerasinghe to win the doubles.  Thomas Rayner made his contribution with a 14-12 victory in his second singles over Jack Bennett who is ranked 28 places above Rayner in the England Senior Rankings List.

The match started with the first two singles when Bennett, against expectations, secured at 11-9 in the deciding game victory over Ormesby number 1, Helshan Weerasinghe.  Mabey won his first match 11-8 in the decider against Shayan Siraj.

With the score at 1-1, Weerasinghe and Mabey won comfortably in the doubles.

In the next two singles Ethan Walsh for BATTS beat Rayner in straight games and Weerasinghe won 11-7 in the fifth against Siraj.

This meant that Ormesby had to win one of the two remaining sets to clinch the victory but at one stage this looked in jeopardy as both Mabey and Rayner were 2 games to 1 down in their singles, but Mabey recovered to win the fourth at 11-7 against Walsh and the decider 11-4 whilst Rayner produced an excellent result to beat Bennett at 14-12 in the 5th game.

This victory puts Ormesby in second place in the League table behind Archway Peterborough on sets difference as both teams have maximum of 6 points from the opening two fixtures.

Ormesby’s next fixture is away in Northern Ireland to Ormeau on the 26th November.

0-0
Ormesby table tennis club are currently preparing for another
course of TT KIDZ.
The 8 weekly sessions are for Boys and Girls up to 11 years of age.
In order not to be disappointed please get your applications in as
soon as possible.
The sessions are on Friday’s from 5.30pm to 6.30pm and the first
session is on 15 October.
For further information please call
Malcolm on 07889 937 056
0-0 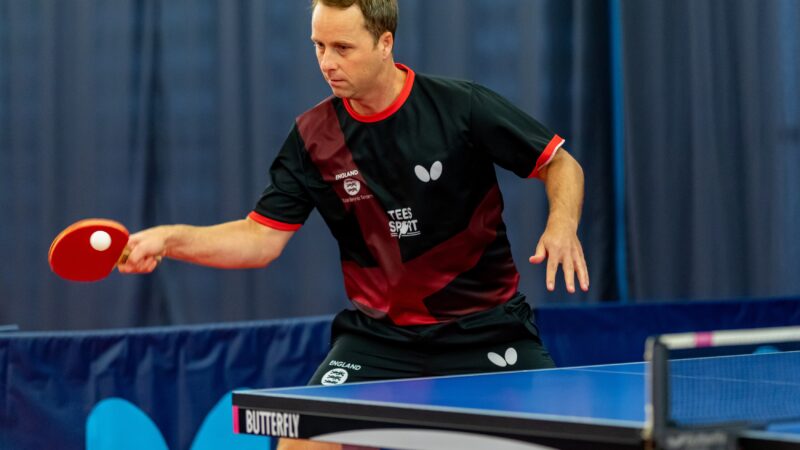 The fixtures for the Premier Division of the British League have been announced this week.

This year playing for our First Team are Helshan Weerasinghe plus Ryan Jenkins, the former Welsh Champion who signed last year but there were no matches played, and Sam Mabey who is the current England no. 9.

We are also looking to include our top juniors in the team including Ben Piggott, Thomas Rayner, Josh Weatherby and David Gofton who are all in our Championship DivThe first away match of the new season for the Ormesby 1 team is away to Ormeau 1 in Ireland.ision team with Denis Neale as the non-playing Captain.

Ormesby’s first match of the new season is away to Ormeau in Ireland on Saturday 18 September.

Ormesby’s first home match in the 2021/2022 British League Premier season is on October 2 when they play North Ayrshire of Scotland at the Ormesby Club. 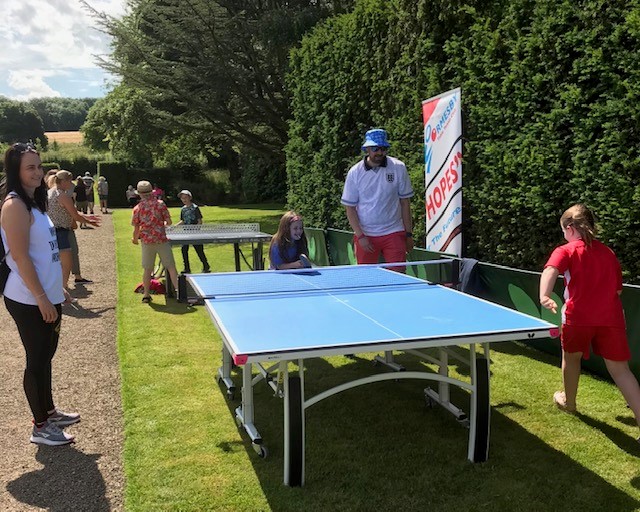 What a great day Malcolm and I had at the local National Trust Property, Ormesby Hall. The weather was wonderful and dare we say, perhaps a little too hot. 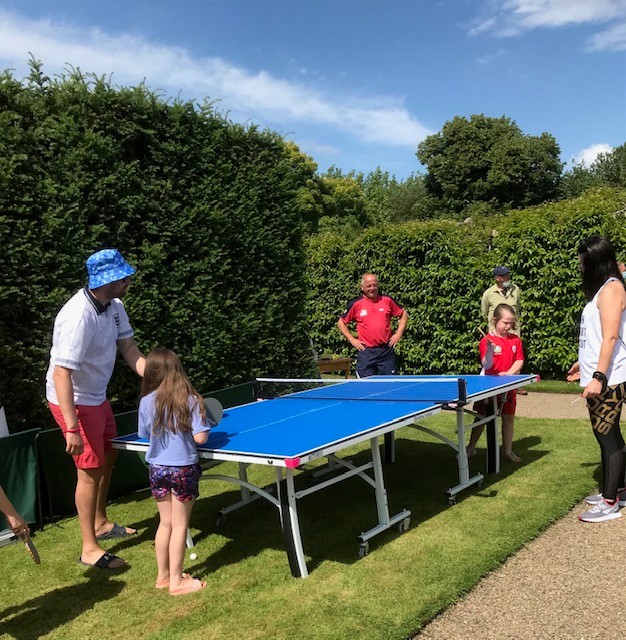 The event was very popular with lots of people who were very interested in playing table tennis and many of the children wanting to challenge their parents to a game. 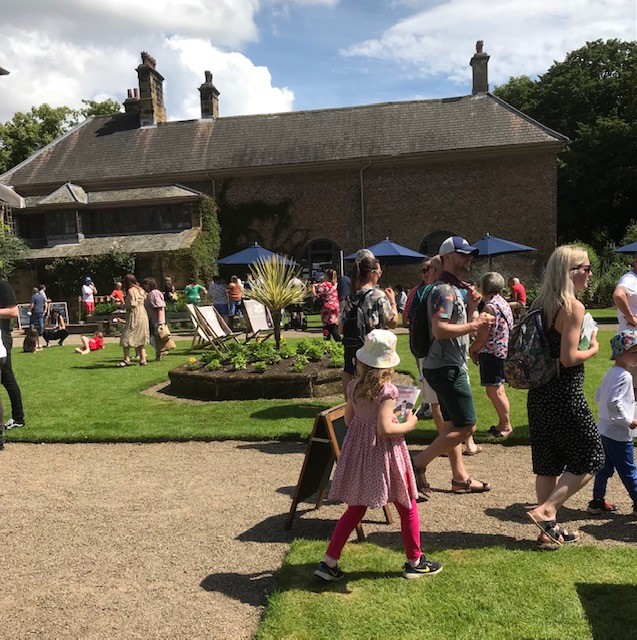 It was really good meeting some of the players who had played at the old club as far back as the seventies.

We even had Jasper a small black and white dog who would have loved to have joined in a game – perhaps it was only the ball he was after. 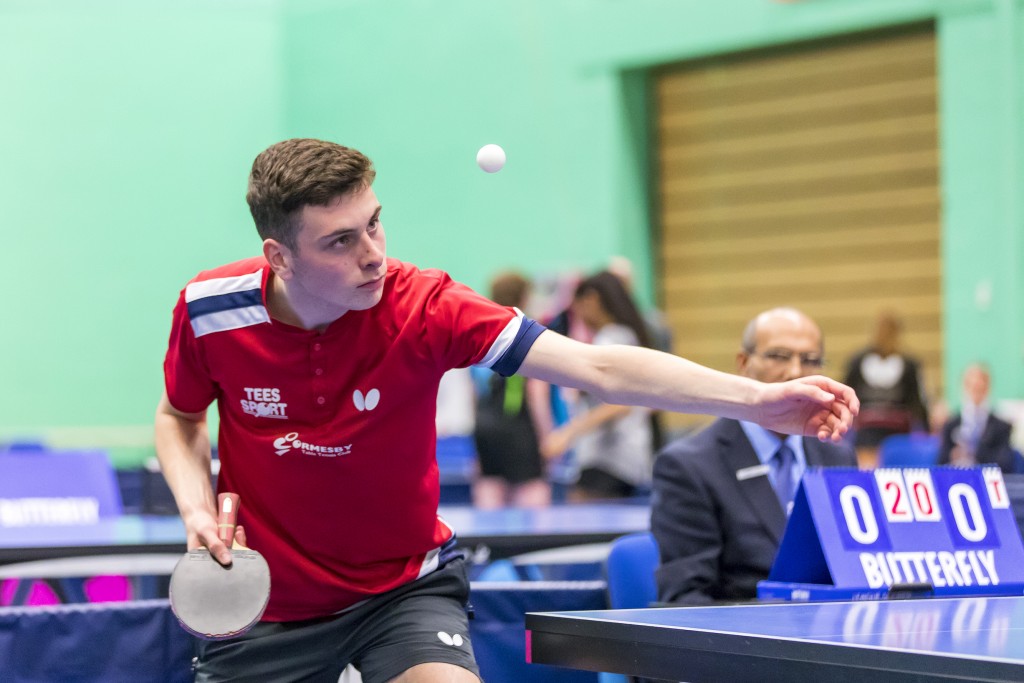 Tom Rayner
It’s the turn of the Cadets and Juniors at the Nationals this weekend at Warwick University.
Four Ormesby players, Tom Rayner, Adam Webster, Eve Witterick and Ella Pashley are all in action.
Some matches can be viewed live on the Table Tennis England Facebook Page.

ELLA PASHLEY
In the U10-U13 Nationals at Warwick University all three Ormesby players, Ella Pashley Tom Wardell and Jack Hodgson made it through their groups. Ella and Tom in the U13’s and Jack in the U12’s.
Ella reached the U13 Girls Semi Final where she lost to Naomi Coaker 3 – 1 and was presented with the Bronze medal. 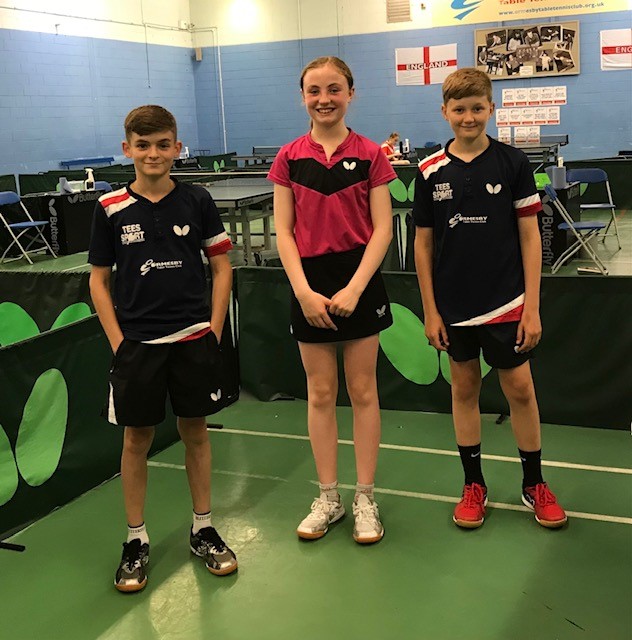 At the University of Warwick, on the 3rd and 4th of July the Mark Bates Ltd. U10-U13 National Championships take place and three young Ormesby players are really looking forward to the event.
Tom Wardell and Ella Pashley who are both 12 will be playing on Saturday and 11 year old Jack Hodgson will play on Sunday.
Everyone at the Ormesby Club wish them good luck and most of all we hope they enjoy the experience.
Left to right Tom Wardell, Ella Pashley and Jack Hodgson. 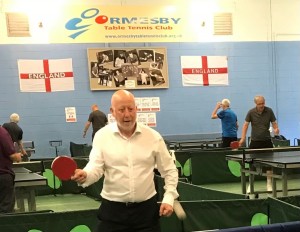 Middlesbrough MP Andy McDonald visited Ormesby Table Tennis Club this morning during one of the club’s 50plus sessions.
With the club still being reduced to 9 tables instead of the usual 15 due to the current Covid restrictions, there was still a really good atmosphere. 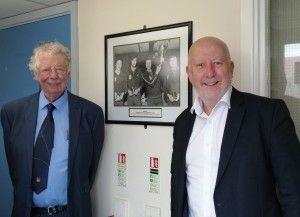 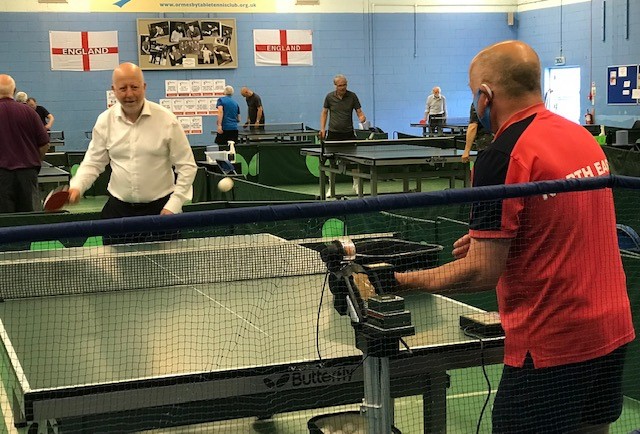 MP Andy enjoyed a few minutes on the robot leading to the suggestion that perhaps we should sign him up for one of the Ormesby Teams!!!!
1 2 3 … 20 Next »